Jacks or Better has always been the game of choice for video poker fans as this game offers some great chances to win, especially when selecting a full pay game. IGT offers Match Times Pay Jacks or Better, a game with a bit of a twist, but one where players can make use of basic video poker strategy to get more paying hands. This game is a great way to boost balances as there is a Match Pay option, where the amount of the win can be multiplied by as much as 8x.

While the base game is played just like any other Jacks or Better version found online, IT has added those multipliers, which will certainly draw the attention of any real money player. This video poker game can also be played in a practice version, allowing players to master the skills they need to be successful. 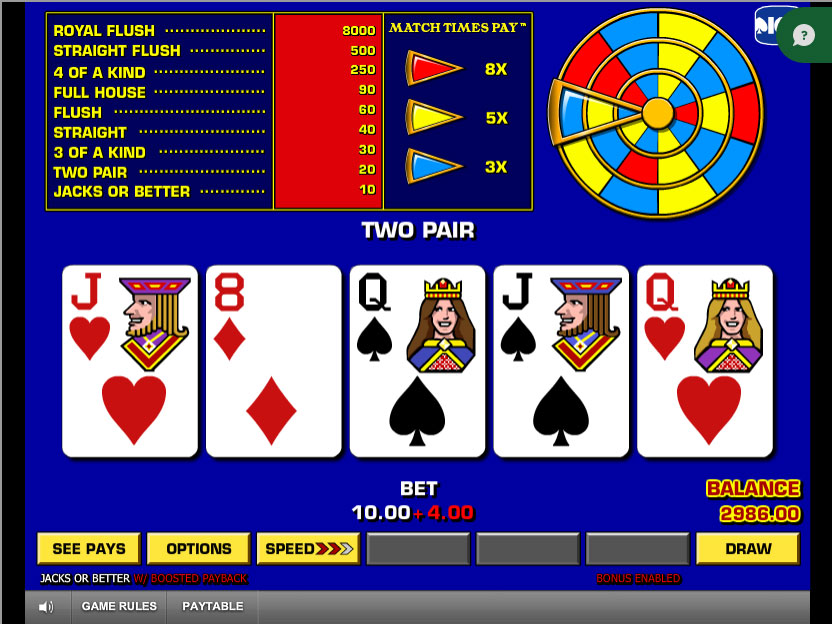 The great thing about this IGT game is the bonus feature, which is activated by placing an additional bet. The game allows players to bet as many as 10 coins per hand and to enable the bonus, an additional bet of 2/5 the wager is required. This will set the bonus wheel spinning on every hand, which can offer multiplied payouts ranging from 3x to 8x the total win amount.

To win the multiplier, the three sections of the wheel must match up with the same colour and the multiplier will be applied based on the colour landed. Blue offers a 3x payout, yellow offers a 5x payout and red presents the top reward of 8x.

When the game starts, players will have the chance to select a total bet amount and choose to place the optional bet for the bonus. The game is played like a traditional game of Jacks or Better and players will try to get the best ranking hand using the five cards. With the bonus wheel, the payouts can greatly be increased and the game offers a top payout of 36,000 coins with a Royal Flush and the 8x multiplier. This is a full pay game as well, so payouts for a flush and full house are increased.