All Aces is one of the great video poker variations created by Microgaming and this game can be played in a demo version or players can chose to bet real money. The top payout in this game is worth 4000 coins when players can create a Royal Flush in their hand. However, the same top payout can be earned by getting four aces, so there are some great ways to win large rewards for those that place a maximum bet of five coins per hand.

Even though this video poker game is not linked to a progressive jackpot, the two chances to win the highest payout will be appealing. Overall, the game has a high RTP, so those that are betting real money will benefit from constant payouts when they use optimal video poker strategy. 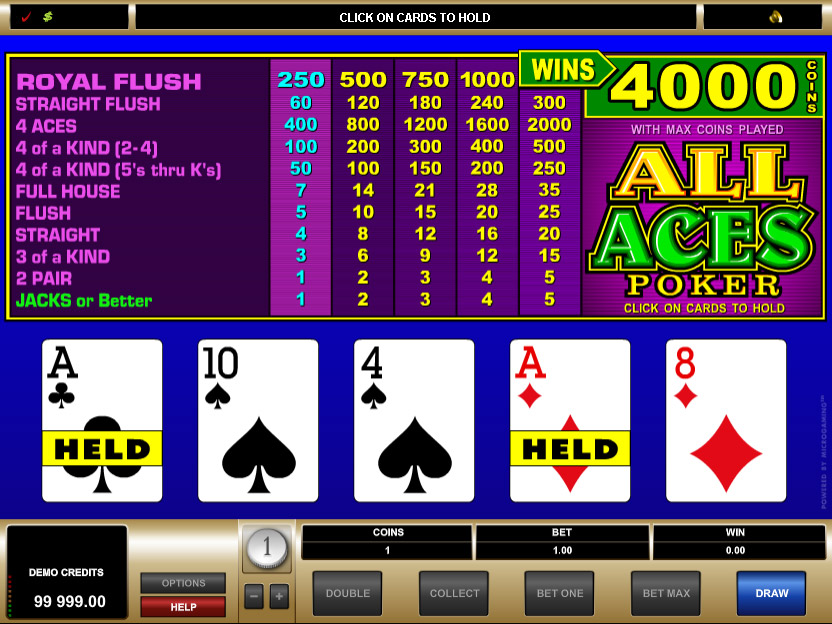 How to Play All Aces

This version of video poker is played with a single deck of 52 cards, so all hands will be created using standard cards with no wilds in play. The goal is to create a hand that will gather payouts and rewards are offered with any hand containing Jacks or Better or a higher ranking hand.

Once bets are placed, there will be five cards that are dealt. At this time, players need to use strategy to determine which card to keep and which to discard. Players can only get new cards one time, so they need to make sure they are going for the highest possible paying hand. Winning hands will automatically be awarded the payout based on the pay table and there is also a gamble feature. With this, players can risk their win amount and try to double or quadruple the payout by playing a gamble game, where they will try to guess the correct colour or suit of a card to be displayed.

When playing All Aces for real money, players can wager a small amount of $0.25. With a maximum bet using this denomination, players just have to bet $1.25 to be eligible for the 4000 coin payout with a Royal Flush or Four Aces. The coin denomination can be increased to $5 per hand, so a max bet is $25 when playing this version of the game.