With so many players enjoying the action and payouts of video poker games, top providers like Microgaming continue to create amazing game variations that can offer more ways to win and endless video poker entertainment and excitement. Aces and Faces Power Video Poker is a game that is based on Jacks or Better and offers some payout chances in the pay table. Players will enjoy the new payouts and will also benefit from the Power option, where they can play as many as 100 hands at the same time, each offering a chance to collect winnings. 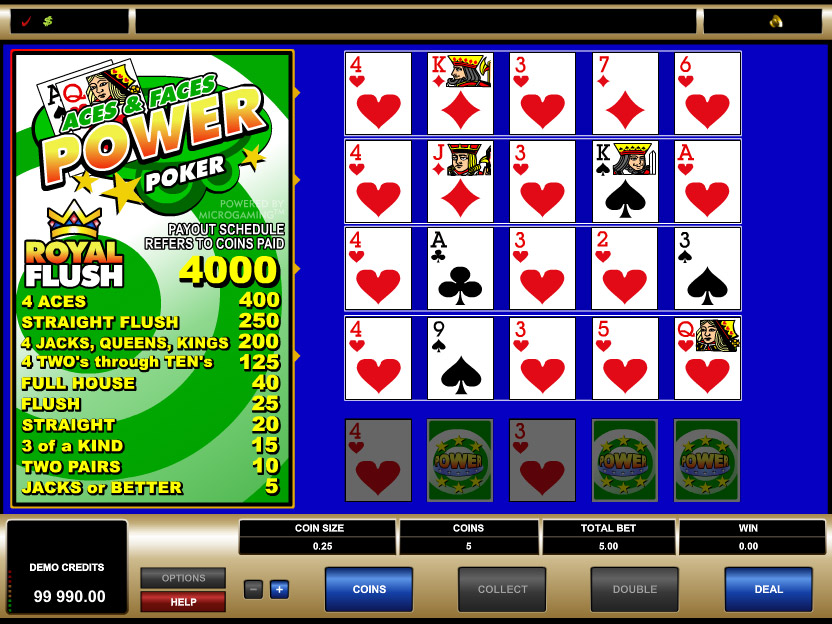 To start earning rewards from this video poker variation, players will have to get a pair of Jacks or Better. The larger payouts will be enjoyed when players get a ranking hand combination that is made up using four face cards. No wild cards are used in the game, but the payouts are higher when players use Jacks, Queens, Kings and Aces to create four of kind hands. With the option to bet on up to 100 hands, the rewards from this game can be stunning.

How to Play Aces and Faces Power Poker

Before betting on the game, players will want to decide how many hands they wish to play. Since each hand will require a wager, it is important to know how many hands to play and also at what bet amount. The game supports various bets and players can bet as many as 5 coins per hand. Once the selections are made, players can play the game just as they would any other video poker machine. They will bet, press deal and make their decisions on what cards to hold and which to discard for the chance to create the best possible ranking hand.

The choice to hold cards in the initial hand will be reflected in all other hands that are being played. For example, if players choose to hold a pair of 8s, the 8s will be held in all hands, with up to 100 in play. There is also an Autohold function that can be used, which will enable the game to automatically decide which cards to hold based on an optimal strategy.