For many years, Playtech online casinos have been a top choice for players seeking a large assortment of casino games that can be played for real money. In regards to their selection of video poker games, there are some outstanding games that can offer huge payouts and most of these games can be played in a free demo version. One great game from the provider is 2 Ways Royal, a video poker selection that is a single hand game offering two ways to win the maximum payout of 4000 coins. These include a Hi Royal Flush and a Lo Royal Flush. 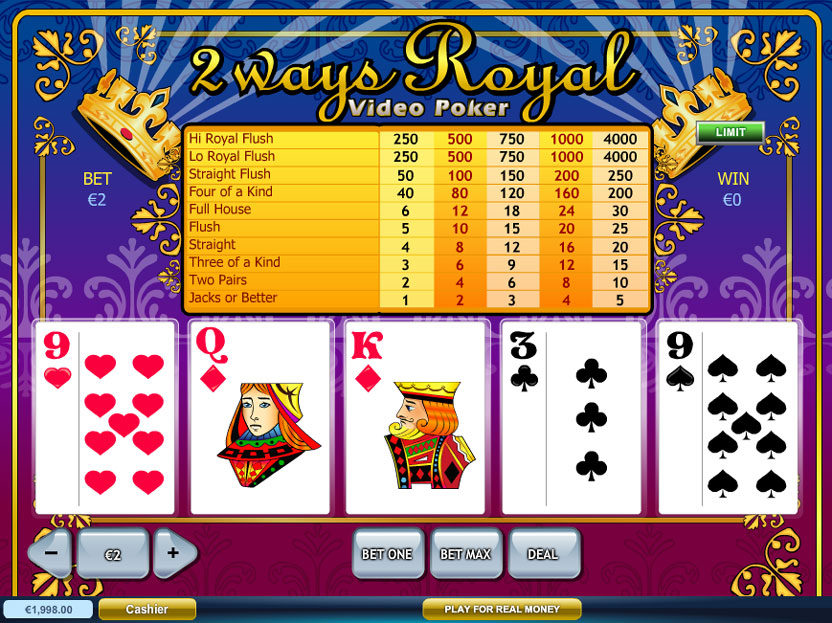 Most video poker games only offer a single top reward, which is often earned with the creation of a Natural Royal Flush. With 2 Ways Royal, players can create a standard Royal Flush and collect the 4000 coin reward, and they can also win the top payout by getting a Royal Flush with 2s through 6s. With no wild cards in play, it can be difficult to achieve a Royal Flush, but since this game offers a Lo Royal as a top paying hand, players have another chance to greatly pad their bankroll.

All other paying hands are basic poker hands as with other video poker selections, so the only added payout is the Lo Royal Flush.

2 Ways Royal is a standard game based on Jacks or Better and there are in wild cards in use. The game is played with a single deck and is only offered as a single hand game. To help players increase payouts, there is a double feature that is presented after any winning hand and players can chose to gamble their original win in hopes of doubling the overall payout.

Those that will be betting real money can alter their bet amounts by choosing various coin denominations. The bets range from a mere $0.05 per hand to $25. The smallest payout is earned with a hand of Jacks or Better, earning an even money reward. In order to win the 4000 coin jackpots, players will have to bet five coins on the hand. The great thing is that even the Royal Flush hands can be doubled, offering the chance to win 8000 coins from a single hand.